Just yesterday, I got my hands on a design suggestion with text passages that were filled with dummy text from the Ipsum spectrum. Lorem ipsum is still alive.

The most interesting dummy text generator I was able to find on the web is this Lorem ipsum. However, this is not just because the generator sticks to the supposed original.

About 14 years ago, our inventor Sven Lennartz wrote this article (in German) with the very descriptive title “Lorem Ipsum: The Blind Text”. The things that were said about the shorter or longer passages with nonsensical word conglomerates still apply today.

Lorem Ipsum: Cicero Would be Turning in His Grave

This is not really surprising, as the foundation for the popular text snippets was created in 45 BC. The usage of text snippets as dummy text has been documented for hundreds of years. The Cicero text “De Finibus Bonorum et Malorum” is said to be at the basis of the current word placeholders. 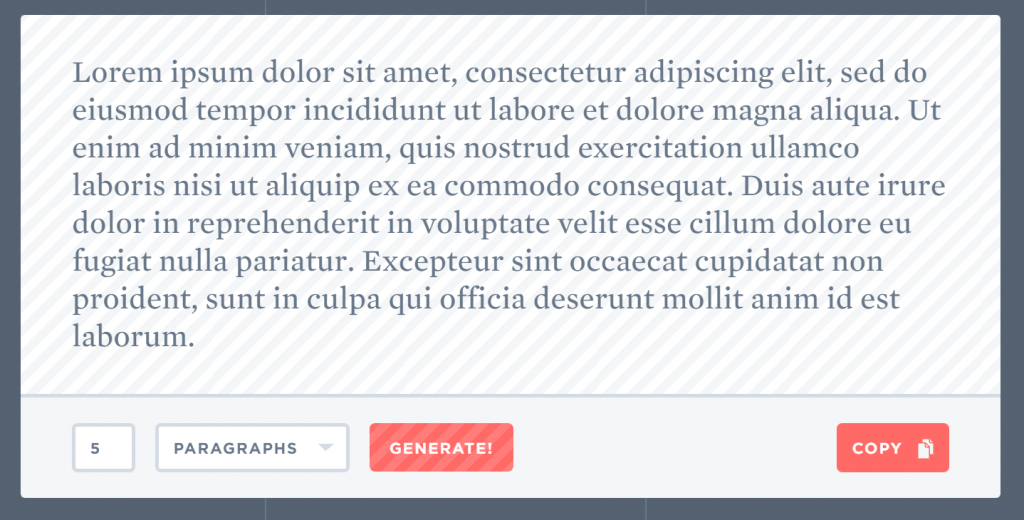 In English, the Cicero text is called “On the Extremes of Good and Evil”. If you want to, you can find a connection between that text and its realization. However, we’re not here to make any philosophical contemplations.

Either way, it’s a fact that lorem ipsum and the Cicero text share a lot of similarities, even though lorem ipsum has become more of an undefinable melange with a bit of Latin in it, rather than just bad Latin. This development can probably be blamed on the evolving needs of the character set. With the more original Latin version, modern print images couldn’t be imitated so flexibly.

Right After the War, We Had Nothing

Lorem ipsum really took off in the sixties of the past century, when text components were used on Letraset sheets. Letraset was a popular system until the 1980s, which worked with sticky letters on transparent sheets. Letraset still exists today, and you can still buy the sticky sheets, but their popularity is more on the homeopathic side of things.

Using sticky sheets was so popular that the providers of DTP software integrated lorem ipsum into their programs, in order to make placeholder texts available in digital layouts without any issues. At that point, Letraset also offered DTP software. Later, a lorem ipsum detection was added, which allowed users to see if dummy text was forgotten somewhere in the final product, before creating the setting copy.

Thus, it doesn’t attract any attention. Nobody tries to read or correct it like people tend to do in design drafts. Lorem ipsum takes up space and shows what the real text would look like in this spot.

Ten years ago, and even earlier, very cheeky SEO “experts” liked to use lorem ipsum white on white in the background of websites, filling the normally pointless text with keywords for which they tried to rank at Google. The Californians figured that out fast. Today, you won’t find it used that way anymore.

In the beginning, I already mentioned that, currently, the Lorem Ipsum generator found under loremipsum.io is the most convincing one to me. But why, as there are billions of other services, is what you might ask yourself.

The answer is simple. For one, loremipsum.io is a straightforward and fast dummy text generator which also works on mobile. You simply define how many words, sentences, or paragraphs you want to receive, and click “Generate”. Then, click on “Copy”, and send the generated placeholder text to the clipboard.

We All Need a Bit of Fun in Our Lives

Secondly, another reason why loremipsum.io is so interesting to me is the fact that the developers put in the effort to create a list with over 40 dummy text generators, found under the menu item “Generators”. There are some real bangers among them.

Trump Ipsum with its concise and typical orange syntax is my personal favorite:

However, I really enjoy Hipster Ipsum as well:

Of course, you’re right to point out that all derivatives, especially the two I just mentioned, give up the main advantage of Lorem Ipsum of it being undefinable gibberish. Well, you could actually argue about that when it comes to Trump Ipsum. After all, he often gives us the impression that his statements were generally lacking meaningfulness, but with Hipster Ipsum, and especially Samuel L. Ipsum, this objection is completely legitimate. And I cannot argue against that.

It’s fun either way. So, if you want funny dummy texts, I gave you a list of 44 services. If you need a serious lorem ipsum, you’ll find it in the same place. You can’t ask for much more than that, can you?

PrevPreviousForgiveness: Your Design Has to Handle Mistakes…
NextIcon Design: 5 Essential Tips to Get You StartedNext
X