Web Development in the Age of the Tech Taliban Recently a heated debate was sparked when CSS Tricks’ Chris Coyier dared to say that achieving the goal (the What) is more important than the tool that the goal was achieved with (the How). Of course, he’s right.

Over the past years, a real epidemy has spread. Every day, new tools, frameworks, libraries, and whatnot are released. It almost seems like every developer was trying to go their own way and establish this way as the standard. Here is what that looks like: 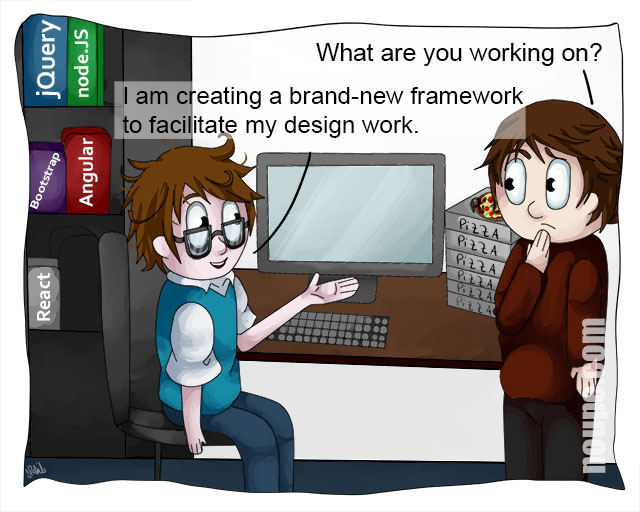 In the past years, I’ve been working on a relatively small web project in collaboration with a developer who was meant to lay the groundwork. After I didn’t hear anything about the state of the project in months (!!), I dared to ask him, and received an answer very similar to this one: 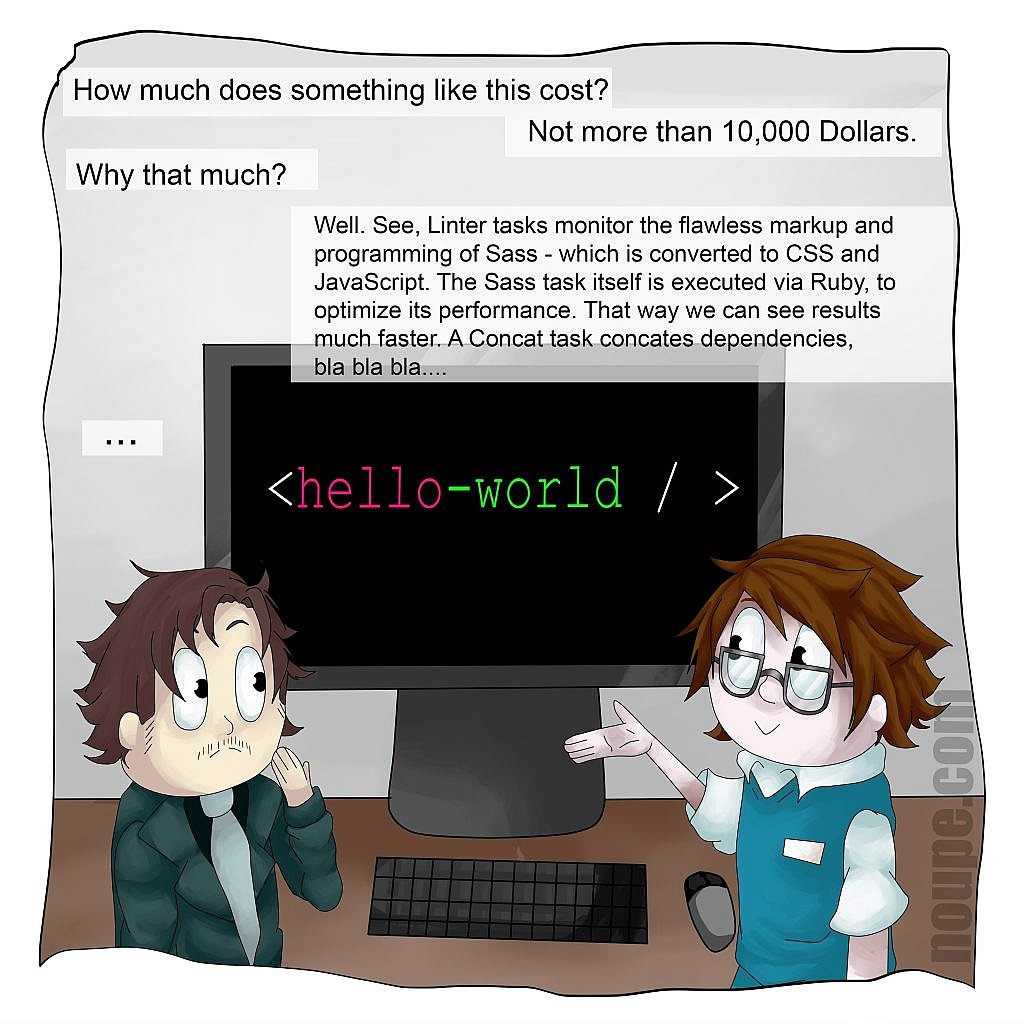 Many Cooks and the Spoiled Broth

Now, if both scenarios unite to form a deadly cocktail, the branch is in trouble. Because, and that’s pretty much what Coyier is complaining about, today, there are too many options and different approaches to accomplish the same thing. The newer tool is always regarded as the better one, forcing the modern developer into a constant race against time, trying to refresh his knowledge base almost every week. This is exhausting.

Trying to treat small projects as if they were the hub of the universe is equally exhausting. I don’t mind having high expectations regarding one’s own work, in the sense of professional honor. Nonetheless, we should stay realistic, as there is no award for the most complicated cutting edge website. Especially not handed out by our average client. With a Focus on the Client, Cutting Edge Falls Off

The client only values a few things. For one, the look has to be right. It has to be modern, and support the project’s purpose. Next, the usability needs to be on point. Users have to be introduced to the page’s goal quickly, allowing for a reliable conversion into customers. Last but not least, the website mustn’t be overly expensive. “Expensive” is also defined by the client, and is unlikely to match our idea of “expensive.”

The tools we choose have to be selected in a way that does not necessarily allow for the absolute state of the art, but is sufficient for a “good enough.” We don’t have to create top sites, but preferably ones that do what they’re supposed to do. In most cases, tools that we have had in our arsenal for over two months will still do the trick.

When approaching a commission, you should look for a good solution for the given case, and usually, it will be the same solution that has already been a good pick for yesterday’s project.

On top of that, it is very likely that you won’t be as experienced with the freshest tools than you’d be with the established solutions that you have used plenty of times already. There’s even the risk of your solution being of worse quality than what you’re usually able to put out due to your infatuation with technology. Let’s hope this doesn’t backfire.

Don’t get distracted by the tech Taliban, and their radical praise for the newest tools. Your target group does not include other web developers; your target group consists exclusively of your potential clients.

Of Course, Progress is Important

Naturally, this does not mean that you should avoid technological progress. In fact, you should be open to it. If you have a tool in your toolbox that no longer meets your requirements, you should replace it with a newer one. But only, if and when it can perform better, and this extra performance is needed for your specific project. Today, however, we experience the phenomenon of having multiple tools on the market with a nearly identical feature set, which can mostly solely be distinguished by their underlying ideological concepts. Of course, all of this was said under the assumption that you master established tools, and are not new to the branch. Branch newcomers will have a tough time when the industry keeps tossing whole bunches of tools, all of which do the same, at them. As an established developer, however, you are able to make the right choice. Just don’t listen to the call of the tech Taliban.

PrevPreviousVisual Design Tool for WordPress: Elementor Lets You Design Pages as Well as Your Entire Theme
Next33 Bold Fonts for Your Flyers, Posters, and BrochuresNext
X